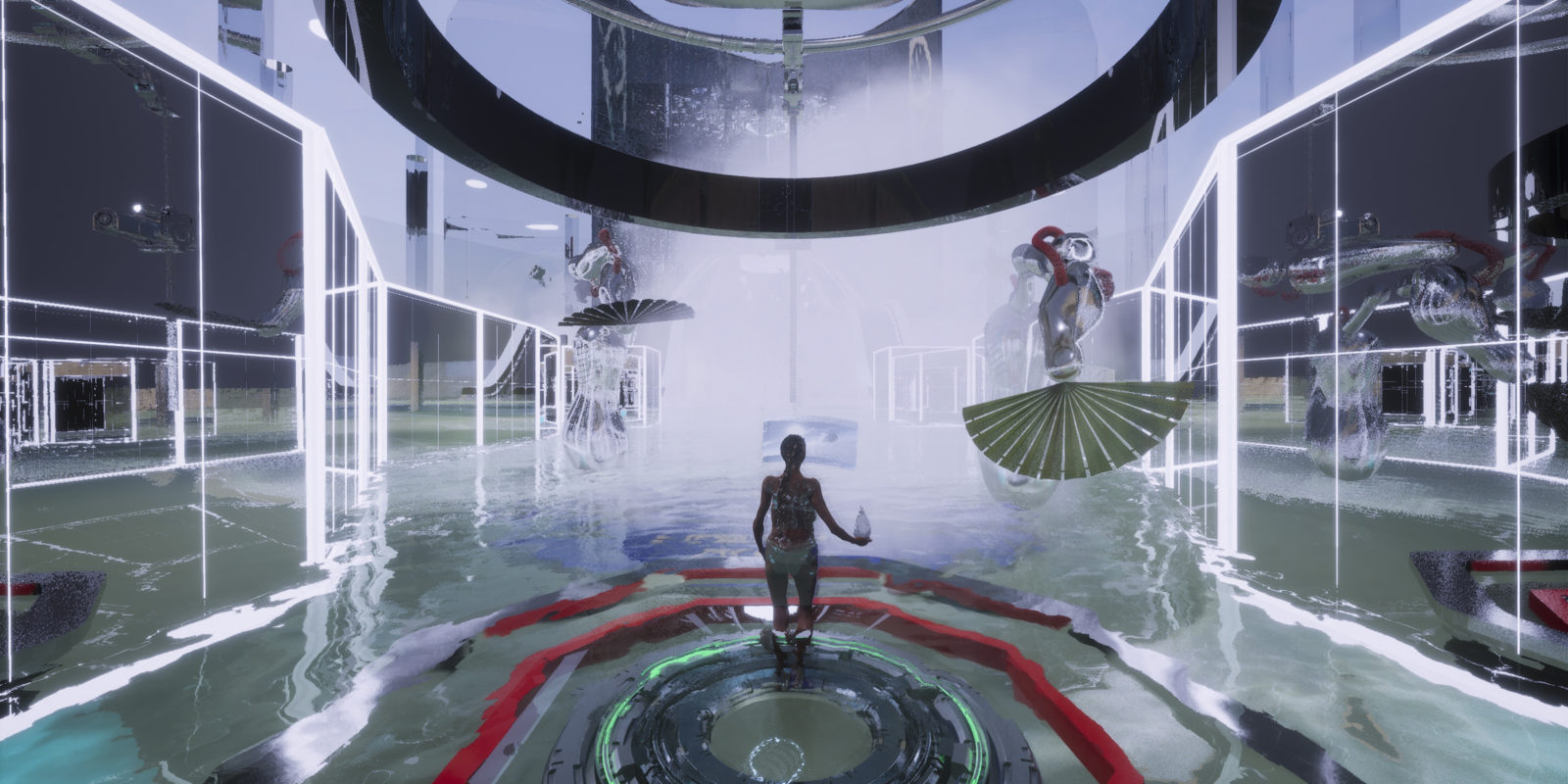 Built in a gaming engine, “We are at the end of something“, is a CGI film installation. The work contemplates the intersection of disparate events, human emotion and ideology in a post Covid-19 world: from social distancing, growing wealth inequality, exacerbated divisions in ideology, to a battle between visions of an egalitarian or hierarchical utopia. There is a desire for change and a reboot of the current system, however, what is this new belief system? Which new structures do we want to create and how are we going to get there?

The film starts off in the check-in and security section of a subverted airport. It follows the strange journey the characters make through the airport to several virtual spaces examining inequality and systemic control amongst a mania of societal tension. Another aspect to this world is that all humans now have glass pregnancy bellies with objects inside. This references Ursula’s Le Guin’s The Carrier Bag Fiction of Theory which reframes history, proposing the first tool being a carrier bag to gather rather than a weapon. Within the narrative, a new world is proposed by Sakeema Crook. In this world, Sakeema invites you to embrace things that are not at the end but rather ever growing and changing. There is a collective feeling that our capitalistic reality is broken with a lack of political wisdom to navigate forwards. In this space, Sakeema is guiding you to embrace change, solidarity and compassion.

–> Ryan Vautier is a CGI artist and designer based in London exploring the fractures between digital and physical. Focusing on the concept that we currently have access to two separate planes of existence, he seeks to explore information of evolution from the digital realm, whilst simultaneously developing works inside the digital realm inspired by physical existence. Recent projects include a residency with Keiken, Aspex Gallery and Portsmouth (2020). Vautier also exhibited work at Future Late, Tate Modern, London (2016).

–> Sakeema Crook is an international dance artist and model, working across Contemporary, Commercial and Fashion industries. During her time in Quarantine Sakeema has choreographed for her first music video as well as shooting remotely for other projects from home. Sakeema also vogues, and is an active part of the London Ballroom Scene and performed for London Queer Fashion Show, Christian Louboutin, Glitterbox Ibiza and Years and Years’ Pyramid Stage set at Glastonbury 2019, as a few examples.